The first question usually asked is: "What is my  HARLING name Coat of Arms?" The short answer is: The HARLING name has no Coat of Arms! There are "bucket shops," trying to sell you fake arms, but these  are not worth the paper they are written on. In England & Wales Personal coats of arms are granted by the Kings of Arms who have direct authority from the Crown. In Scotland the Lord Lyon has a similar authority. A personal grant of arms is made only to the applicant and it is an offence in law to usurp or display a grantees arms without his/her permission.

PLEASE NOTE: All images on this web site are Copyright held! Please respect this. 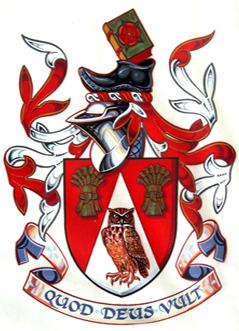 My interest in heraldry is such that in 1977 I petitioned Garter King of Arms, the late Sir Anthony Wagner, to make me a personal grant of arms, thereby entitling myself and my descendants to bear arms in perpetuity. I am pleased to write my petition was eventually successful. Petitioning for arms is certainly not an exercise to feel apprehensive about. The herald I dealt with regarding my grant was Richmond Herald,  (the late John Brooke-Little) and I must say he was extremely helpful. The officers at the College of Arms are there to advise and make sure that the design of the full achievement is heraldically correct before passing it to the Kings of Arms for final approval. The design I chose for my arms is primarily based on the occupations of my ancestors. The Garbs (wheat sheaves) for agriculture; The Lancashire Clog represents the Cotton Industry (clogs were preferred footware) and the Book my father's profession of Librarian. The Owl was purely a personal choice being the favourite bird of both my wife and myself ...... Artist (the late) John Bainbridge
The heraldic blazon is: Gules on a Pile reversed Argent, between two Garbs Or an Owl Proper. Crest: A Lancashire Clog Sable, issuant therefrom a Closed Book Bendwise Or, edged and garnished gules, charged with a Rose of the last barbed and seeded Proper. Motto: Quod Deus Vult (What God Wills). 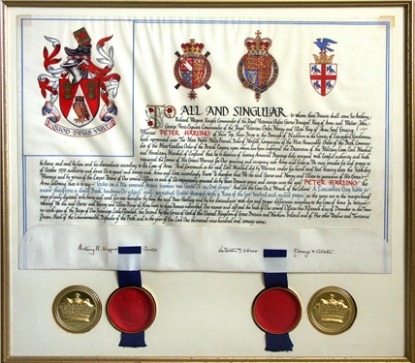 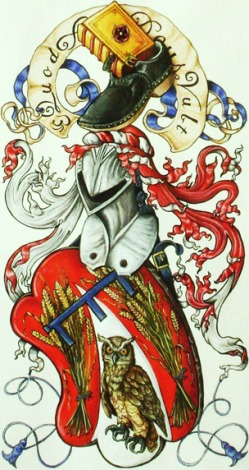 My son Nick's arms is shown here with a Blue Label, which denotes he is the heir to his father's arms pictured above. This charge which looks rather like cricket stumps. Is heraldicaly termed:  Debruised with a label of three points azure.
The artist who painted this lovely emblazon is: Alexander Liptak. (2009)

But what of the UNICORN, anciently seen emblazoned on Sir Robert Harling's banner at Agincourt in 1415. Also seen displayed in the church of Kirkby Lonsdale, a memorial to Christopher Harling, (1748), Gentleman of that Parish? Well, as we discovered the UNICORN is once again in abeyance. But hopefully not for much longer! I have lodged a  petition with Garter King of Arms requesting permission to be granted a badge banner displaying the Unicorn Sejant Sable, armed and unguled Or. His response to date has been favourable. The College of Arms officer attending to my request is Richmond Herald, Mr Patrick Dickinson. I will consider it a great honour to once again bring out of abeyance the HARLING Unicorn of ancient times.

Arrival of the Unicorn 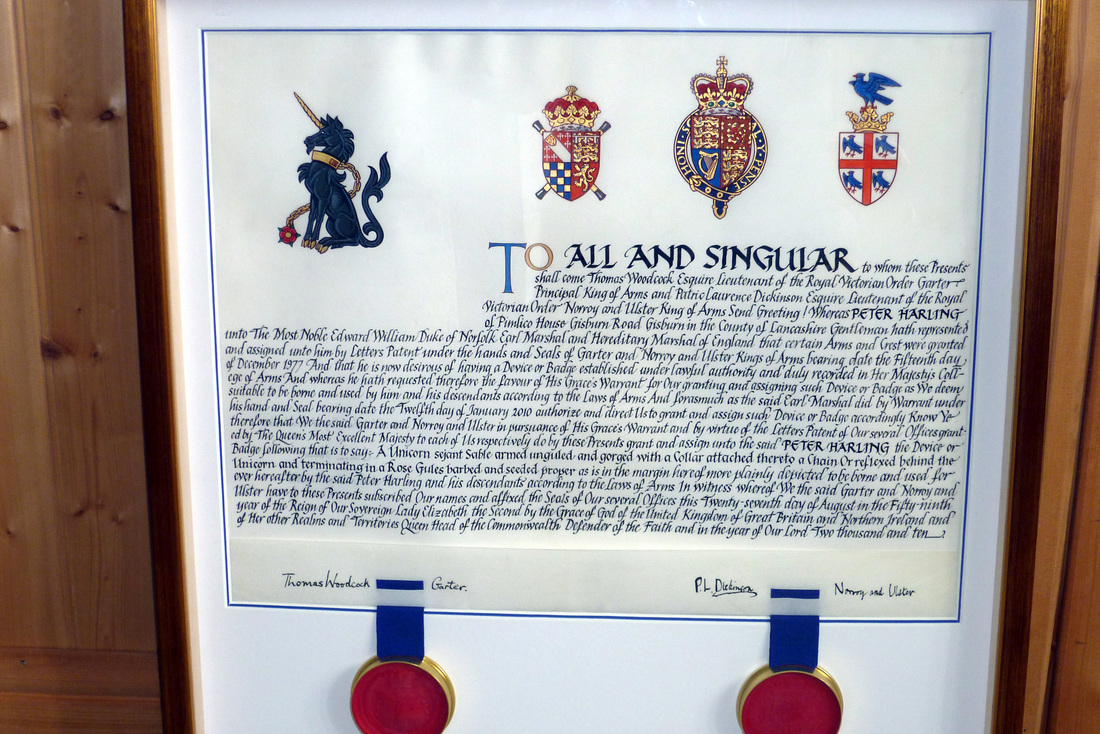 The Heraldic Blazon is: A unicorn Sable armed and unguled and gorged with a collar attached thereto a chain Or reflexed behind the unicorn and terminating in a rose Gules barbed and seeded Proper

With collar and Lancashire Rose 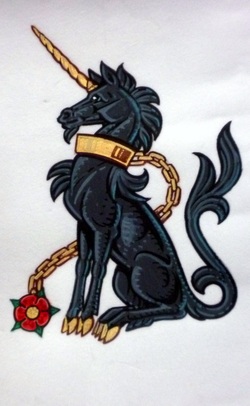 It came as quite a surprise to me, when during the course of discussing the possibility of my being granted the official use of the Sejant Sable Unicorn, that I was indeed the only HARLING on record at the College of Arms to have been granted a Coat of Arms! So it would appear that my appeal for any other armigerous Harling will not come to fruition, that is at least in the short term, hopefully at some future date Arms may be granted to a future Harling petitioner.

Regarding my current Letters Patent; granting the use of the Sejant Sable Unicorn Badge. This would not have been granted to me had I not already  been previously granted a Coat of Arms in 1977. Also not being of 'direct' descent ( ie. father to son) from the last bearer of the  Arms the Rev. William Harling, 1765; it was necessary to 'difference' the
design slightly to make it personal to myself and my descendants. My agent at the College of Arms, Richmond Herald Mr Patrick Dickinson (now Clarenceux King of Arms), suggested that a collar and chain terminating in a Lancashire Rose would surfice, also that these would add to the 'spirit' of the badge ie. The unicorn was now chained to the Lancastrian branch of the family, a suggestion I was happy to accept. 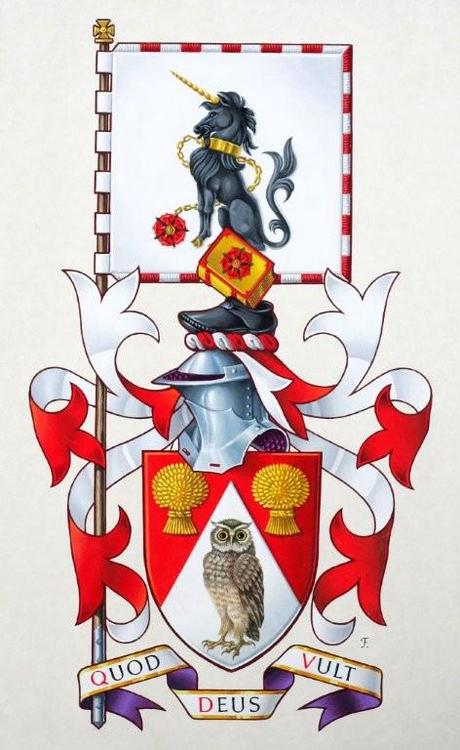 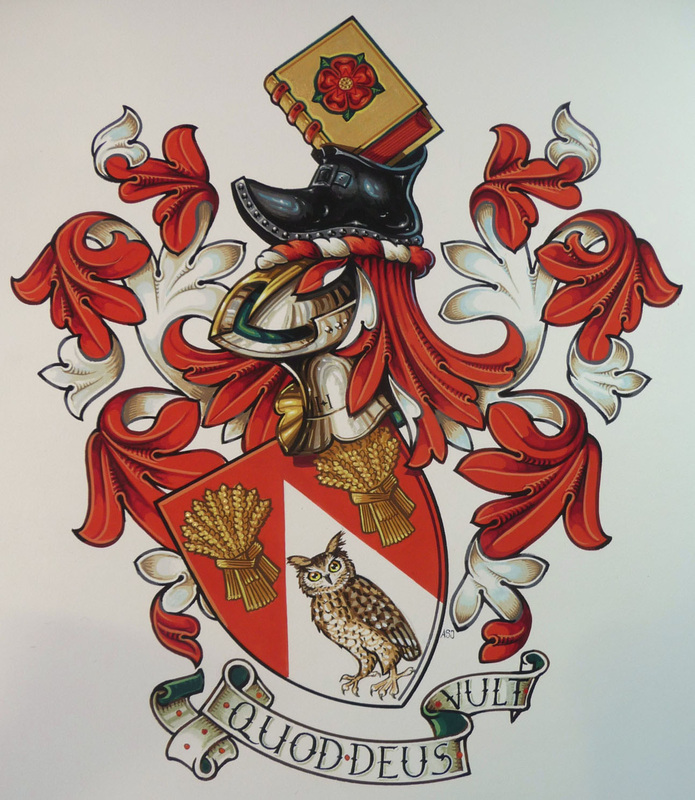 Mr Jamieson was kind enough to accept my commission to emblazon my arms; even though he enjoys Royal patronage and his time is mainly taken up by work not only on behalf of our own Royal Family but Royalty world wide.
This beautiful rendering of my arms is hopefully destined to become a family heirloom; to be hung proudly and admired by future family members. Meanwhile, I hope to enjoy its beauty for many years to come!
Thank you Andrew (2011)
............... oooOooo ............ 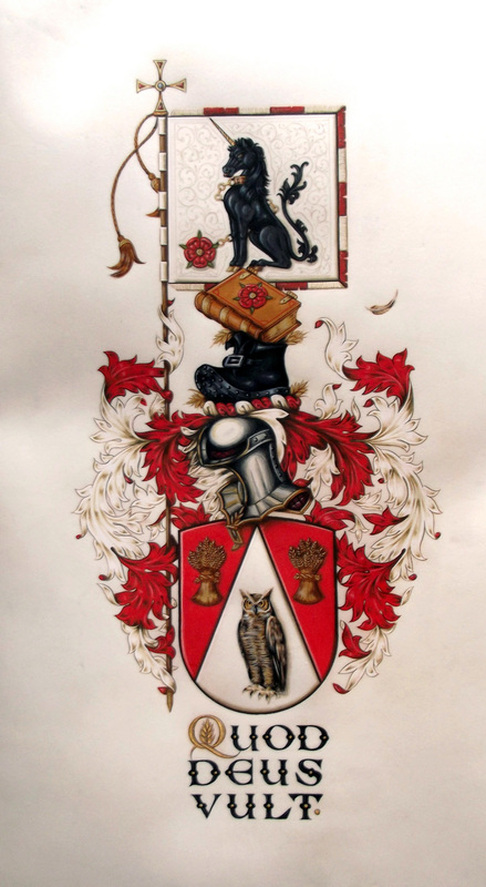 This lovely rendering of my full achievement was executed by Internationally famous heraldic artist Neil Bromley.

The detail on the original artwork is superb and is painted on Velom. Neil has added some charming details to the painting. Viewers will notice the owl feather floating down and the corn peeping out from under the clog and book. Also the diaper work on the background of the badge banner has given that special extra charm to the whole achievement. 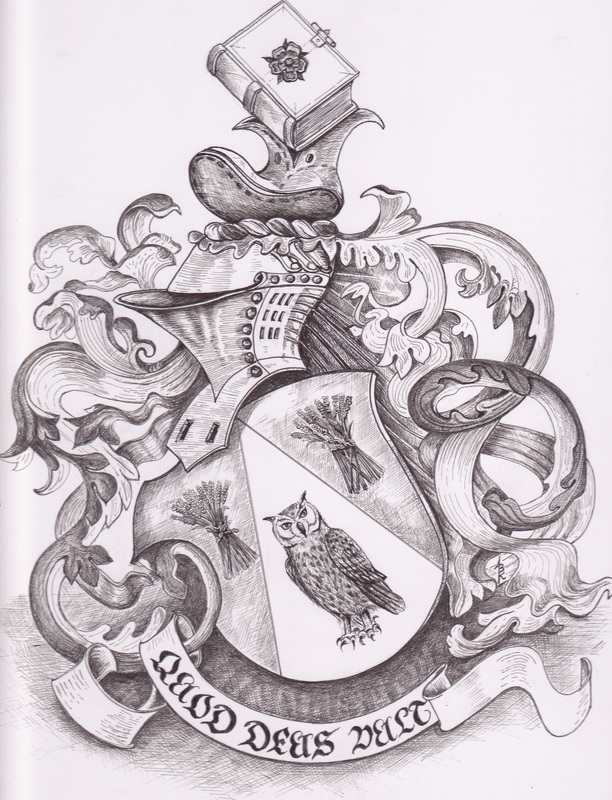 This beautiful pen and ink artwork was gifted to me by Anna and I must say I am extremely pleased and grateful to her for such a lovely Gift. Anna Borewicz-Khorshed, is a well known Polish artist who has been gifted with many artistic talents, painting, calligraphy, antique restoration just to mention a few! Her talent is seen here with her depiction of my Coat of Arms.