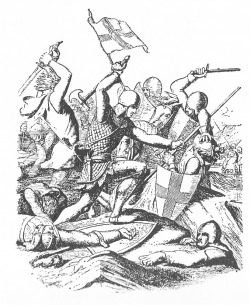 Sir Bryan Tunstall of Thurland Castle was Captain of the Ewcross Wapentake (Yorks.) at the time of the battle of Flodden (1513). His primary duty, prior to this event, was to inspect all male persons between the ages of 16-60 who resided within his jurisdiction and to make sure they were 'furnished' with a weapon, usually a bow and arrows (Archer), or a Bill (Billman), a bill was a short pole weapon with a hook and spike head. The parish of Ingleton when called to Muster fielded ...  Richard Herlyng, Billman with Bill and Jack; Matthew Herlyng Billman with Bill; John Herlyng Billman a Jack no Bill at Muster. A Jack is a strong leather coat worn by Billmen. Clapham parish fielded Leonard Herlyng Billman, no Bill at Muster. (My direct ancestor).

It is probable that these men were amongst the levies taken to the Battle of Flodden by Sir Bryan Tunstall, there is no evidence to confirm this, But Sir Brian is documented .... "Bryan Tunstall of Thurland, ashamed of the cowardice around him, after kneeling down and taking a small portion of earth into his mouth as a last communion, launched himself at the advancing enemy, killing a Scottish knight before being cut down by many hands." ... Was Sir Bryan deserted by our ancestors? I hope not!

The John Herlyng mentioned above was by trade an Innkeeper, usually men of some standing in the community. Inns were often village meeting centres and were also used by travelling merchants as a convenient place in which to sell their wares. It is impossible to say of the two inns known to exist in the Tudor period which was owned by John, both were situated on the main street, Ingleton, the Wheat Sheaf still surviving to this day. John died in 1570 and as would be expected his will inventory lists many items associated with his trade  ..... Many beds and much bedding; many variety of tableware; much salts and candlesticks; many pewter, pots pans; brewing vats etc. ... also listed are 4 cows, 1 oxe, 1 pig, 1 wether sheep (castrated male).Finally after all his debts and expenses had been paid his son John received £35, quite a sum of money in 1570. These Tudor Wills and Inventories make fascinating reading.
John inherited his father's business of innkeeper at rather an unfortunate time, for Richard Cholmley Esq., who was the Lord of the Manor of Ingleton, decided that the time had come to unilaterally revise the ancient "Customs of the Manor." This ancient "Custom" effectively gave the manorial tenants many rights, eg. fixed rents; property passing down from father to son, or next of kin; the taking of wood for personal use; grazing of animals on manorial lands etc. Cholmley in a nutshell wanted to institute a system whereby he decided who should tenant property and as to how much rent they should pay, along with the withdrawal of other ancient rights.
A long acrimonious dispute followed. Cholmley employed baliffs to harass tenants out of their houses, in one instance they even reduced a house to 'ground level.' The tenants could take no more, they pooled monies and took Cholmley to court, this of course was a very expensive exercise. As the case dragged on villagers had to sell their possessions in order to meet legal costs, indeed it is recorded that women and children were on the brink of starvation. A Chancery decree of the 23rd June 1593 in the names of Richard Guy, John Tatham, John Harling and George Tatham 'for themselves as all others' was signed. At last compromise had been reached, but the bitter feelings between tenants and the Lord of the Manor lasted for many years to come.

This is the parish where my own direct line of Harling ancestors hail from. To be more precise an area of the parish named Keasden, some-one-and-a-half miles from the actual village of Clapham. Keasden is an area of rough moorland hillside with wonderful views across the valley to  Ingleborough. It is on this  hillside that Leonard Herlyng, who was mentioned in the Muster Roll, scraped a living as a husbandman. According to the Manorial court rolls Wyckforth was the name of his tenement and garth, and he is first recorded there in the Subsidy Assessment of 1520.
Leonard, as were his 'cousins' in Ingleton, was a Copyhold Tenant, this made it possible on his death for his tenancy to pass to his eldest son or next of kin. With the aid of later tenant lists and a good run of family wills, occupation at Wyckforth can be traced a further 212 years, bringing us to the year 1732, when around that date John Harling, (born 1696), now a Yeoman sold Wyckforth.
In 1786 was born William Harling who was the 9th generation of our Harling branch and was the last of our ancestors to be born in the Parish of Clapham.  Destined to play a small part in the Industrial Revolution, William, having served an apprenticeship as a Blacksmith was drawn to the expanding cotton weaving and spinning town of Preston, Lancashire, where engineering skills were much in demand keeping the wheels of the newly developing cotton industry turning. One of William's sons Robert Harling (born 1830), who incidentally is our 10th generation, was also an engineer, but he had the responsibility of driving and maintaining one of those wonderful steam engines that turned every wheel in the mills and foundries. To see these engines working, silently nodding their great arms as the piston fires, looking akin to dinosaurs nodding their heads, must have been an extremely impressive sight. I have been told on good authority that the steam engine driver was the most respected man in the mill!
The 20th century brought about family occupation changes once again.  My father William Harling (born 1910), the 13th generation of our Harling  branch of the family, chose the profession of Librarian. Sadly his career was cut short by the outset of WWII, when whilst serving with the RAF Volunteer Reserve he was taken prisoner in the Dutch East Colony of Sumatra, subsequently dying in a Japanese prison camp Sept. 1944.
On a happier note the 21st century has seen the birth of our youngest family member to date, a grandson Rowan Taylor Harling (born 2007). Rowan is the 16th generation to bear the name Harling in an unbroken line from Leonard Herlyng circa 1520. I can but hope that he in turn will maintain this Harling link with past generations.