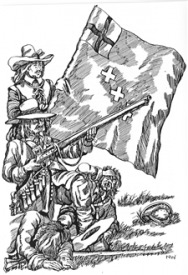 AT THE OUTBREAK of the Civil War in 1642 the Earl of Derby, who was the Commander of all Royalist forces in Lancashire, issued a Colonels commission to Thomas Tyldesley of Myerscough Hall, and instructed him to form a regiment and fight for the King. A regiment in 1642 consisted of both cavalry and infantry, known as 'Horse and Foot' respectively. Colonel Tyldesley in turn issued Captains commissions to local lesser gentry instructing them to raise troops, John Harling was one of the captains commissioned, and subsequently became a Company Commander of Foot. (Shown left is Col. Tylesley's conjectural Foot colours, Field green, cross device white by Neil Wright).

His military career was one of ups and downs, mainly downs. The Lancashire Royalists  took a tremendous battering, fighting in all parts of the country, the history of the regiment reads like a novel. John's first encounter with the enemy was at Edgehill in Oct. 1642, he was fighting on the left wing in the front rank. There then followed  skirmishes in 1643 at Preston, Lancaster and Whalley Ridge (better known as Read), where the Royalist army was ambushed. The Earl of Derby and many Royalists fled. Colonel Tyldesley with his now depleted regiment made haste to York, but his stay there was short for his regiment  was ordered to escort  Queen Henrietta to the King's H.Q. at Oxford. They marched by way of Burton on Trent held at that time by the Parliamentarians. Colonel Tyldesley's Regiment stormed the town and won a great victory. The Queen knighted Colonel Tyldesley after the battle for personally leading the attack. No doubt Captain John Harling along with other officers celebrated with their Colonel and the Queen this success, but a few months later the tables turned again.
The battles of Gloucester (Sept. 5, 1643); Newbury (Sept. 20, 1643), then north again. The Royalist army now led by Prince Rupert, first to relieve Preston then onward to Marston Moor (July 1644). Here Tyldesley's regiment received terrible casualties, only five officers and  200 men survived from a 900 strong contingent  Colonel Tyldesley had taken to Marston Moor. Luckily Captain John Harling was one of the surviving officers,  along with his Colonel, Maj. Orde, Capt. Westby and Lt. Col. Anderton. All who survived made their way back to the security of Liverpool, where once again Colonel Tyldesley boosted up regimental numbers, subsequently marching to Lichfield and garrisoning the town, which he held until the 10th of July1645, surrendering only on instructions from the King, who himself had surrendered to the Scots on the 5th of May. Only one third of Tyldesley's officers had survived this first phase of the Civil War, happily Captain John was one of them.

Three years later in April 1648 the Scots changed sides making another uprising possible. Tyldesley, who had been hiding on the Isle of Mann reformed his regiment. Captain John Harling was recalled as senior captain and second in command of the regiment. John also enlisted his eldest son Henry who by this date was now aged 20, he was commissioned as Ensign.
Led by the Duke of Hamilton, the Scots plundering their way south, crossing the Border on the 8th of July. Tyldesley got his men on the march and laid seige to Lancaster Castle, as usual the castle was short of water, Tyldesley was on the point of taking it when he received news of Cromwell's victory at Preston (17th Aug. 1648). He hastily abandoned his seige and took his regiment to Kendal to meet the retreating Scottish army. Failing to persuade Maj. Gen. Munro to stand and fight at Kendal he marched to Carlisle for safety, but on arrival there he was refused entry by the Scottish Governor Lt. Col. Livingstone. In desperation he made for Appleby Castle, which eventually fell to the Parliamentarians on the 9th October. Captain John Harling and his son Ensign Henry Harling survived but were taken prisoners. Sir Thomas Tyldesley was banished from the kingdom (he returned to the Isle of Mann). John and Henry returned home under Parliamentary rule.

The Eventual End of War

Peace was not to last. Two and a half years later on the 6th Aug. 1651, King Charles I with an Anglo/Scotish  force crossed the border near Carlisle and marched swiftly south. It had been secretly agreed that the Earl of Derby and Sir Thomas Tyldesley would return from the Isle of Mann bringing with them Manxmen to reinforce the remnants of his old regiment. John was promoted to Major and was again appointed second in command, Henry was  to serve again as Ensign.
The next 19 days were to become critical and tragic! The Earl of Derby instructed Tyldesley to remain at Wyre Water (disembarcation point from the I. of M.) and recruit more men, while he, along with a small force under the command of Major John Harling were to ride to Warrington to catch up with the King and confer. Derby was instructed by the King to stay at Warrington and recruit as many men as possible, while he (the King) with his Scottish army pushed south. But  soon after the King had left, Derby's small force was attacked by Colonel Lilburn's Horse Regiment. During the skirmish Major John Harling's horse was shot from under him, resulting in his being taken prisoner for the third time. On this occasion the Parliamentarians were not so lenient for he spent the next 67 weeks imprisoned at Coventry.
But it would appear luck was still with John, for within a few days of his capture and imprisonment the Royalist army met the enemy at Wigan Lane, the indefatigable Sir Thomas Tyldesley was killed along with most of his officers and men, the Manxmen had fled the field, but it is documented that the Lancashire Foot were reported "..to have stood grimly by the roadside near where their Colonel had fallen." Ensign Henry Harling was wounded and taken prisoner.

It is incredible to think that at age 64, after having been involved over a ten year period in at least 14 encounters with his enemies, the majority of which he was on the losing side, also having been taken prisoner three times, spending in total one and a half years in captivity, that John would have had enough! But NO, he fought one more time at Winnington Bridge, during the ill fated "Booth uprising of 1659" His luck, or a fast horse still with him, he was lucky enough to escape capture and hid in London until the restoration of Charles II in 1660, to whom he presented this petition:

JOHN HARLING PETITION (ABSTRACT)
Maj. John Harling. For the place,or position of making strangers bills in the
Custom House, London, worth £40 a year. Served during the late war in England
Ireland and Scotland. Marched into England with his Majesty. Was taken prisoner
at Warrington and confined at Coventry 67 weeks. Was engaged in
Sir George Booth's  rising, and forced to fly to London and lie concealed till
the restoration.
Dated 1663